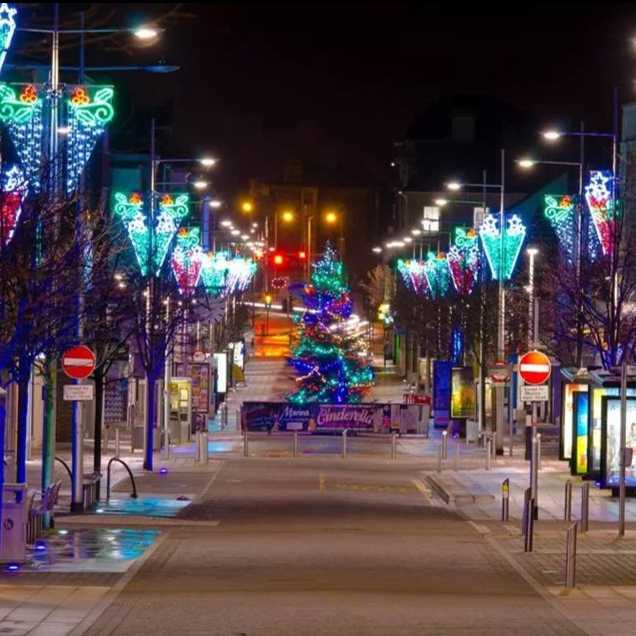 Lowestoft Vision and Lowestoft & Waveney Chamber of Commerce are pleased to announce that the countdown to Christmas officially begins this Saturday, as the festive lights are turned on in Lowestoft town centre.

Live stage entertainment will begin from 3pm in the town centre, with Paul Carter and the team from The Beach entertaining the crowds and gearing up for the countdown for the big switch on at 5pm.

Throughout the day a Christmas fun fair will be in town to help entertain the young ones whilst shoppers search for those all-important Christmas gifts. Shoppers can also enjoy Christmas carols and songs from the DPA show choir and newly signed girl band NW10.

In addition to the big switch on, Lowestoft Vision will also be launching a big Christmas competition offering you the chance to win a whole range of prizes!
Lowestoft Vision have taken over a shop window in the Britten Centre, which has been filled with wonderful prizes and gifts galore supplied by our local Lowestoft retailers. Prizes include a 42” television, food hampers, furniture, clothing, a children’s bike and lots of games and toys. Called Lowestoft’s Winning Window, it will run from 21st November until 19th December.

All you have to do is take a look at the Winning Window and guess the complete value, using the entry forms provided. The person who guesses closest to the total value of the window will win all the prizes on display which will all be delivered in time for Christmas.

The festive activities in the town are being organised by Lowestoft Vision and Lowestoft & Waveney Chamber of Commerce. Lowestoft Vision BID manager Darren Newman said: “The Christmas lights switch on is always a great event in the town with a wonderfully festive atmosphere. We hope that the community will enjoy taking part by shopping in the town and enjoying the entertainment which we have on offer.”

Speaking about Lowestoft’s Winning Window Darren said: “We have been overwhelmed by the support we have received by local businesses who have provided prizes for our Winning Window competition. One lucky person is going to have an amazing Christmas gift.”

Turning on the Christmas lights will be Paul Carter and Tim Lindon from The Beach, Emily McAvoy from the Marina Theatre’s Sleeping Beauty, the Lowestoft Mayor and of course Father Christmas himself will also be there!

Following the Christmas lights switch on there will be events taking place in the town each weekend in the run up to Christmas which include Finding the Elves on the Shelves, street entertainment, Christmas carols, the fairy-tale parade and Santa’s grotto. For information on Christmas events click here