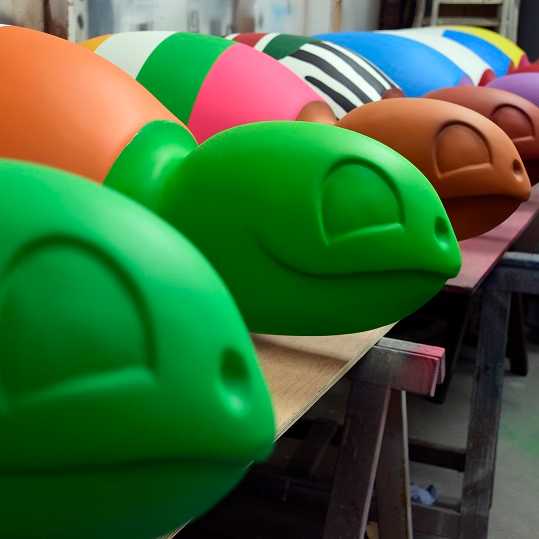 The much loved Lowestoft Turtle Trail is set to return for the third time on the 16th of July as part of the Lowestoft Summer Festival.

The trail was first introduced to the town by Lowestoft Vision, which is part of Lowestoft and Waveney Chamber of Commerce, in July 2014 and following its success returned in 2015. The trail proved extremely popular in attracting visitors and the community in the town and as a result businesses and the local community requested the turtles return for one final time.

The trail involves finding 18 giant turtles that have been hidden in businesses around the town centre. This year the trail will be have an international theme to link to events such as the Olympic Games and European Football Championships. The idea is that those taking part in the trail will need to identify the country which the turtle represents.  As with previous years each correctly completed trail map will be entered into a prize draw to win a cash prize. In addition, there will be weekly prizes of offer.

Over the past four months Lowestoft Vision has been working behind the scenes to develop the trail. In February they contracted local company Scenic Projects to decorate all 18 turtles which included providing the designs for 13 of them. The remaining five turtles are currently being designed by local primary schools in a competition.

Darren Newman, Lowestoft Vision BID Manager, said “When developing this year’s trail we wanted to work with a local company which shared our vision for the event. We are really excited by the designs which Scenic Projects have provided and can’t wait to put the turtles on display.”

“We felt that it was important to involve the local community with the trail and thanks to our partnership with Lowestoft Rising we were able to offer primary schools a chance to take part in designing five of our turtles. We have been amazed with the designs we’ve received and look forward to announcing the winners”.

Stephen Wilson Art Director at Scenic Projects said “The team at Scenic Projects is delighted to have this opportunity of working with Lowestoft Vision in this annual event. Creating both the design and painted artwork finish for this year's theme is what our company is all about and our involvement conveniently coincides with our move from Beccles to new premises at Nelson Wharf in Lowestoft".

Further information on the trail will be announced in the coming weeks or see www.discoverlowestoft.co.uk for updates.