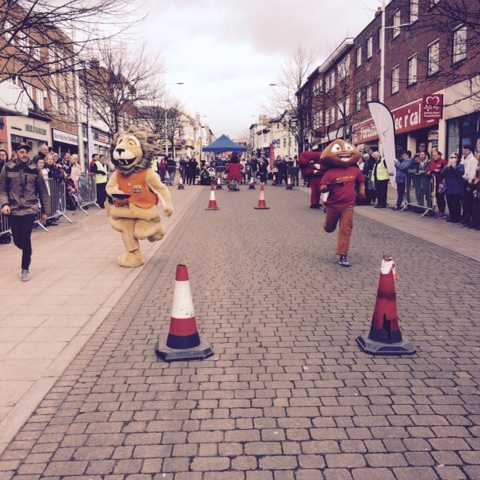 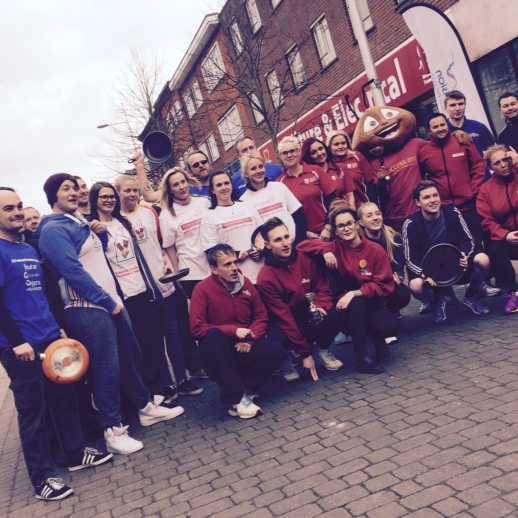 Teams have a Flippin good time!

Armed with frying pans and chefs’ hats, the Lowestoft Vision event took place outside Beales department store, with crowds lining the course to cheer on the runners.

The event kicked off with the mascot race, with Access Ant from Access Community Trust and Africa Alive’s Reggie the Lion progressing through to the final. They were also joined by Picture Studio’s Pixel Bear and Lowestoft Mascot Kipper who both progressed from heat two. But it was a battle once again between crowd favourite Reggie and Access Ant, with the Ant regaining his trophy from 2015.

The main event took place in five heats with teams of three competing in a relay race. Each team member had to run the course flipping their pancake three times at the half way mark, before handing their frying pan, pancake and hat over to a team mate.

Many of the teams struggled with the windy conditions and pancake flipping techniques, causing much entertainment for the crowd.

Lowestoft Flippers, the Marina Theatre, Sentinel Leisure Trust and Graphitas all made it through to the first semi-final. The second semi-final was made up from Lowestoft Journal, Wilko and the British Heart Foundation.

Both races were very close and competitive but it was Graphitas, Lowestoft Flippers, Wilko and The Journal who progressed through to the final.

In an extremely close race, the Wilko team - made up of Millie Devon, Michael Thompson and Jack Malcolm - took the win to become 2017 champions despite a diving effort from The Journal’s Mark Boggis.

Millie added: “I couldn’t flip my pancake to save my life, it was so hard. But we all had fun.”

Matt Goddard, Picture Studio’s director and a Lowestoft Vision member, said: “Lowestoft Vision are pleased to deliver another flippin great Pancake Day Race. We were delighted to see so many Lowestoft businesses taking part and I’m really pleased with the great turnout from all the public, who braved the cold to “Discover Lowestoft” and cheer everyone on.”

Lowestoft Vision would like to thank all the businesses who took part and those who braved the cold to cheer on the teams.